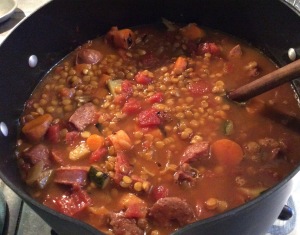 Here’s the recipe as promised:

When the weather is turning to fall we like a hearty, healthy soup chock full of fresh vegetables. It’s easy to make and very satisfying as the evenings get cooler. And I like to make a sufficient quantity so we have leftovers; (this freezes well too).

If you have veggies from your summer garden such as zucchinis and tomatoes, this is a great way to use them.

It is a thick soup; almost like a stew. You can, of course, thin it with additional broth, but we enjoy the texture and heartiness of it as is.

Recently I made this soup with red lentils from a company called “Preger” and found that the lentils never got totally tender, even with repeated cooking. First time for one hour, then, as I had made a large batch, we had leftovers, and cooked them for 1/2 the next time, then 45 minutes. Still not tender! I did add cumin, and allspice, and the flavor was very good, but still disappointing. Have any of you, dear readers, had this experience?

TO DO: in a 6 quart Dutch oven or other large pot:

For a delicious meal serve with whole grain toast and a green salad with your favorite vinaigrette, (for a suggestion see ).

Hope you don’t mind, but before  I share this recipe I want to express something that has become even more clear to me; the difficulty it can be for folks who had totally different lifestyle and eating habits to make healthy choices–and how impactful that can be.

What prompted this are two people I met in different circumstances. Rick and I were shopping for olive oils at a World Market store, and a guy started asking us about our choices, and that he was recently diagnosed with Type 2 diabetes, and was “trying to reduce sugars”– he had no idea about carbs – just that “sugar is bad.” He was buying two large cans of high carb snack foods (no sugar though), to substitute for sugary snacks. Actually I couldn’t help but suggest he try this blog (and especially read “The Journey” post).

The second incident was a woman who came to our house to pick up bottles we were giving away (we’re in process of stuff reducing)–she was thrilled as now she had containers for her own salad dressing, sauces, and such non-processed foods she was making for the first time in her life. She was so excited as this was a huge change for her!

It hit me strongly that these folks are representative of a large group of our population- who grew up with lots of processed foods and are used to eating one way, and are now faced with changing their diets- and what a major deal it is. I know this theoretically, of course, but it was reinforced!

Made me realize even more how lucky some of us are to have grown up mainly eating in a healthy way, with an emphasis on fresh foods; (although my son went through a fish stick and tater tot phase–I’m not a total purist (<*).

Makes me even more motivated to show that delicious, healthy eating and cooking is not difficult, not expensive, (cheaper that buying most processed foods, such as bottled salad dressings), and fun to do!