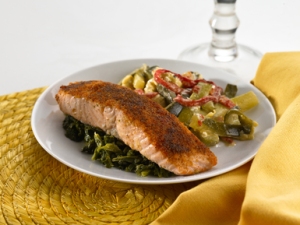 This is a departure from my usual posts. I was approached by Diettogo.com, a company that offers a prepared meal service, including special selections for diabetes, and was asked to try a week’s worth of the foods. I agreed and was sent a large insulated box of foods, under lots of reusable ice packs, packed with a varied selection of 9 meals–including 3 meant for breakfast and 6 for either lunch or dinner; up to me.  A major factor of the meals is low carbs; although many of the meals had 45 carbs/meal–the highest amount recommended for diabetics to have in one meal, according to the registered diabetes dietitian whose workshop we attended- see my blog post, “The Journey,” https://type2delicious.com/the-type2-delicious-journey-welcome/

Another thing is that you can customize your orders and exclude anything that you may be allergic to, such as peanuts.

Here’s my review; not of every meal but highlights, etc.; what I liked best and why:

Of the dinner meals my favs were the blackened salmon, a generous chunk of well cooked, fresh tasting fish, and a tasty, good textured salmon black bean burger; both included a puree of cracked wheat, spinach and cauliflower which was tasty although a bit bland. This grew on me and got better as I ate more. However, I found the spicing of most of the meals either too bland or a bit too salty, especially as I cook with limited salt, but I do use a lot of no-salt spices, garlic, red pepper and lemon.* (There was a lemon slice with the blackened salmon but it needed more.) I also liked the Porcini Mushroom Chicken, very moist and tender chicken with delicious mushroom filling, and Eggplant  Parmesan, except for too much pasta under the eggplant. The sauce was really tasty..

My least favorite was the turkey and mashed potatoes with gravy. The turkey had a rubbery texture and both turkey and potatoes were too salty, however, this meal also had green beans and almonds, one of my go-to vegetable dishes, but in contrast to the turkey, they needed a little salt, garlic or some spice but were still good. Even so, they were my favorite vegetable of the whole series and tasted the most like freshly prepared.

The majority of vegetables in the meals were frozen and reheated. They were ok; but had the texture of reheated frozen vegetables. At least they were not mushy or over cooked.

The breakfasts were good. Two had whole wheat bagels ready for your toaster; one with cheese and egg; (obviously a kind of Egg mcBagel). I would caution that it’s messy- when you microwave the cheese you have to be careful to have a plate handy as you take it out- it’s hot and runny! The other bagel breakfast simply had a container of peanut butter. Both bagel meals included a yummy fruit cup–not sweet, just the delicious taste of real fruit. The third breakfast was a whole grain and nut cereal and a 100 calorie yogurt; I thought it very satisfying.

Now I have not much to compare as I rarely eat prepared meals (except occasionally Trader Joe’s or frozen Stouffers); so I think these are good prepared meals for those who want quick, easy to fix, (meals are microwavable in 2-3 minutes) and low carb (based on the 45 carb recommended limit per meal). I have no idea of the cost as I was given these to evaluate for you, my dear readers.

But understand, nothing comes close to freshly cooked foods such as the recipes on type2delicious.com!

*I also suggest that a small low sodium spice packet be included with many of the meal choices and let consumers choose their own amount of salt and additional spices as desired. 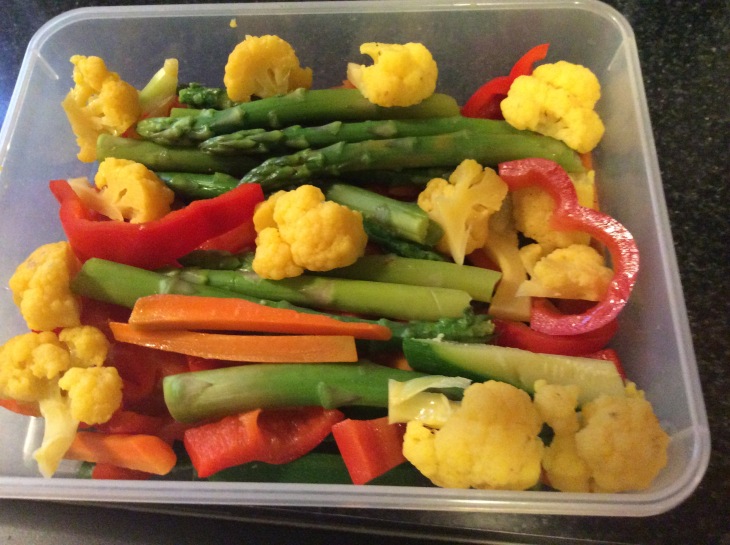 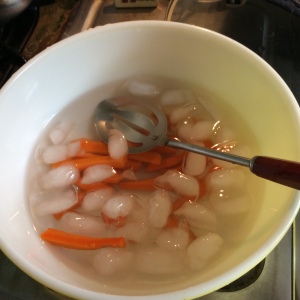 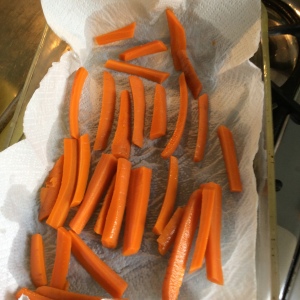 When much of your diet is low carb and you prepare recipes with lots of vegetables there’s often a great deal of chopping and prep work. Or you eat lots of raw vegetables, especially for appetizers with hummus or other low carb dips. (I admit that can get boring). One way I’ve found to enjoy fresh veggies and have them on hand for snacks and appetizers is to blanch a lot of them at one time.

Actually I’d never blanched a lot of veggies at one time, (I had done a few just for a one time use); then I was invited to a large party and had volunteered to bring hummus and a quantity of veggies. I had had enough of raw veggies for awhile so decided to try blanching them. And it was a revelation! They were so much tastier than the raw–tender, fresh and full of flavor- some crisp, some not so, but still very tasty; (this is a process–there’s a big difference in blanching a few to doing a few pounds). I chose asparagus, carrots, zucchini, yellow squash, red peppers and bright green pea pods- not only good to eat but good to look at–beautiful!

Blanching means boiling vegetables for a few minutes and then plunging them into ice water; one kind at a time. One trick/method I learned from Cook’s Illustrated is to blanch the darker vegetables last as they can discolor lighter vegetables, (as you use the same pot in turn for all the veggies — details in the TO DO section).

I invite you to blanch a quantity and variety of your favorite veggies–store in the fridge for a week of snacks or serve to your guests and/or family for a delicious, healthful treat.

1. Wash (don’t peel); then slice vegetables into matchstick or 2″ long slices; snap asparagus in half.

2. Prepare ice water bath in bowl next to the boiling water

3. Bring water to boil in a large pot or Dutch oven

4. Add sliced veggies into the boiling water, starting with the lightest colored vegetables; (make sure the water is boiling for each batch). For example, I started with the cauliflower, then yellow squash, zucchini, carrots, peas, asparagus, red pepper).

6. Immediately lift out with a large slotted spoon or a sieve and plunge into the ice water for 1-2 minutes. (You’ll most likely need to add ice for each batch as the hot veggies will increase the temperature.)

7. Lift out each batch from the ice water and drain on paper towels.

8. Repeat for each type of vegetable.

10. Refrigerate if not serving right away.